The studio objectives for this course were to integrate our emerging knowledge of...

...into a cohesive design agenda.

The studio was split into two parts. In the first part we attempted to design a roofscape for the Central Square YMCA in Cambridge, MA. We understood that this roofscape would lead us into the second part, which was to design a multi-program urban park in the back of the building on a several acre parking lot. We first researched green roof precedents and  then worked on the roofscape for 3-4 weeks. The rest of the semester was devoted to the urban park. The emphasis on framework and precedent allowed efficient familiarization with the site before we moved into a larger scale and program.

For both the YMCA roofscape and urban park I took the position that the site was a refuge of inter/personal discovery. I attempted to be consistent in this position throughout the studio. The terms that I started with from initial concepts carried through to the urban park and played an integral part in the program, despite the many revisions. 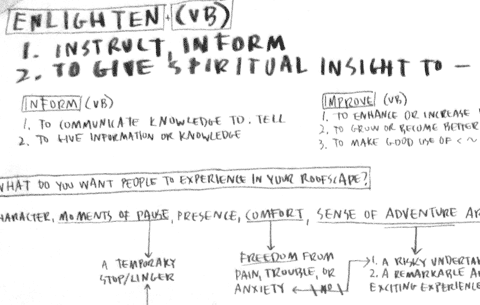 I started with the term "enlighten" to envision this idea of "refuge of inter/personal discovery."  Eventually I came up with a thesis:

Enlightenment can be defined broadly as wisdom or understanding enabling clarity of perception. This enlightenment can range from a sudden, highly localized epiphany to a life-long journey. Therefore the experience of the roofscape necessitates multi-sensory experiences that are clarified through the use of moments of adventure around the corner.

It later evolved into: Comfort created by moments of pause, yet having enough energy for a sense of adventure around the corner. This is a diagrammed and defined below. 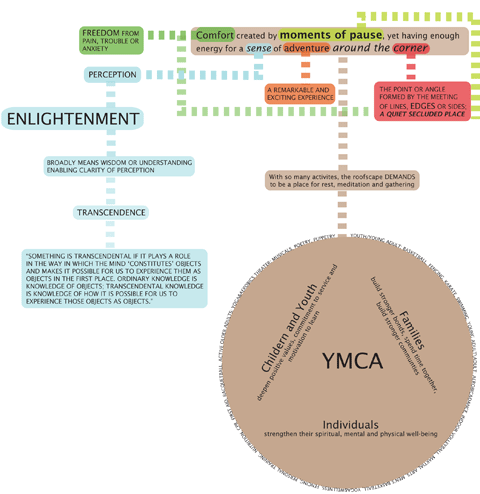 I had first approached the program as "zonal entities." Each"zone" held a component of the program and there was little overlap. This is illustrated below:

Conceptual Zones - orange is adventure, green is comfort, yellow is moments of pause, and blue is enlightenment

I soon realized that thinking of the program in zones was very constrictive. We were required to design spaces for 1,2 and 10+ people on the roofscape. I could not design each space simply for "adventure" or "comfort" or "enlightenment." Furthermore, these were qualities of presence and not program. That is, a space created for adventure could be used for self-reflection; so I was doing no more than contradicting myself:

Enlightenment as a concept is too broad for this design. It is necessary to focus the program. The context+analysis diagram of the YMCA demonstrated that the YMCA has a very active program schedule with a wide range of activities. Therefore, the roofscape DEMANDS to be a place for gathering, rest and meditation. Restful activities include socializing, reading/computing, cloud watching/napping. As the YMCA is in essence a gathering place -- where people enrich themselves in mind, body, and spirit -- it would be foolish to ignore the response that people utilize the facilities for the purposes of enlightenment; whether it be mind, body or spirit. Enlightenment can be defined, broadly, as wisdom or understanding enabling clarity of perception. While I initially thought that this enlightenment was a geographic response to the surrounding neighborhood context  as seen from the roof, it can range from an highly localized epiphany to a life-long search for this clarity of perception. Thus, the entire roof is enlightenment.
With this refined concept, it was no longer necessary to divide the space into ‘zones’. I can accomplish my own design goals -- moments of pause, thresholds, adventures around the corner as a processional, sensory experience with small moments of discovery depending on light dappling through a maze or a corner never quite noticed before as one walks through the space. ... Enlightenment is not a destination -- as such is the case with knowledge and learning -- so the circulation paths are essentially circular in nature. 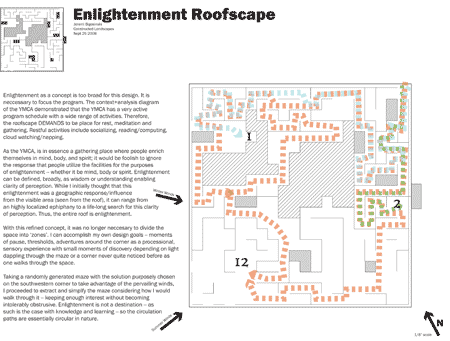 It is important to note that once freed from the constriction of zones I was able to develop the program as a procession. That idea of procession was attainable in an urban park context because the prior site use was a parking lot. Commuters who parked their cars on the site had little need or want to linger. I sought to tap into that potential energy when developing concepts for the urban park part of the studio. That lead to a final thesis of:

Retain[ing] transient people with translucent adventures around the corner. This is achievable through a “catch and release” field system.

This was the first studio in which I needed to adjust the program to make all the components of the program fit together. The concentration of program elements did not radiate out to the edges. That would make it difficult to "catch" people and "release" them into the park. Furthermore, while I did not have "zones" of program, I did have "modules." Even though I attempted to interlock the "modules" they were still too separate to be fully effective. I was worried that visitors would only stay at one or two of these areas and then leave. Another concern was that I didn't want the noise or activity levels to overpower the passive areas. This was the reason why half the park was raised to fifteen feet into the air to isolate background noise. That was the concern, that I inadvertently made areas of the park too isolated. 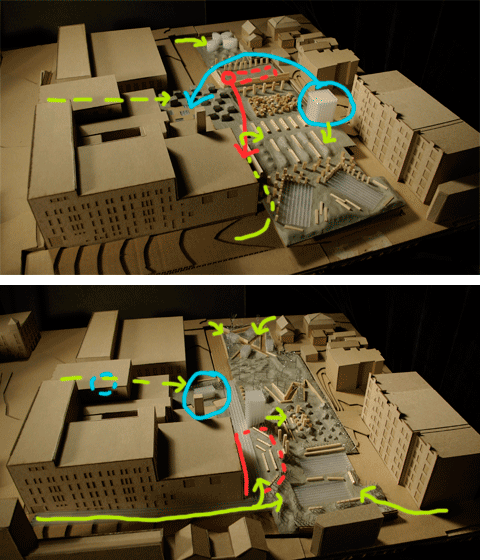 Blue shows new placement of cafe, red for projection screen and seating, and green for entrances to park. The bottom image is the final model. The blue dotted circle is the newstand.

Previously I had the cafe located in the Community Center as it seemed most logical. Instead, I found it necessary to split up the program and add an element. Lowering the park meant I had slightly less surface area to work with -- which resulted in some significant but worthwhile changes. I succeeded in addressing my noise-dampening  passive recreation concern by carving into the grade. This also allowed a connective path between the far side of passive activities (video gaming and sunbathing) to the near side of active recreation. This included the children's play-scape, an entertainment area that projected onto the wall of the YMCA and also allowed view to the basketball court of the YMCA in the evening, and the badminton courts. The relocation of the community center and cafe  closer to the pedestrian "boardwalk" (which translucently covered the vehicular access to the underground parking), and the introduction of a newsstand (not a required component of the program) near Mass Ave, encouraged a park-wide osmosis of people from different backgrounds and ages.

Possible Circulation Routes based on background and age

I tested these ideas through model, and not so so much through drawing. For the first half of the studio I was still working mostly in plan, but then I needed to switch over to working almost exclusively in model. I found drawing more suitable for gestures of design. Moving into detail, however, was more appropriate in model as imagining and representing space was more accessible.

As I mentioned earlier, we looked at green roof precedents before we started the roofscape. Elizabeth Hindy-Harman and I were tasked with presenting the ASLA Green Roof in Washington, DC. Each team's contribution of case studies were added to a group pool of precedents; readily accessible to all. I think this was a fair representation of what we would expect from our designs -- what was and is possible. 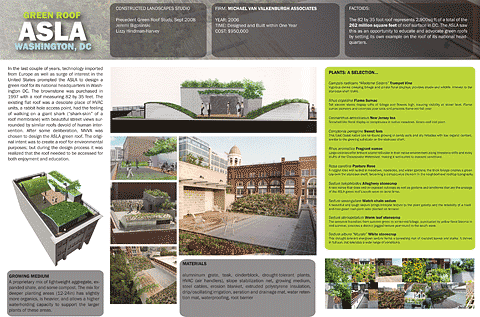 Concept Diagram of Adventures Around the Corner Urban Park

I think this project nearly surpassed my design goals. I would thoroughly enjoy this park if it were constructed. There were still many details that I wanted to finish designing that would have fully encompassed the program. I only lightly touched upon the experience of parking, playscape materials, Church Street arrival, below grade parking entrance, below grade reading alcoves, and the Mass Ave news cafe entrance with its overhead LED invitation.

Had I more time and representation resources, producing illustrations of these design elements would have strengthened the understanding of the park. This was an issue raised during the Final Critique. I had apparently discussed far more than I had elected to present.

One discussion topic was a comment that the design would overwhelm the senses. I understand that -- to a point. A considerable concern developed over the course of the studio: I realized that I was designing spaces for different demographic backgrounds to be visited at all times of day. While at an earlier point I had some elements of the program use more space, it was after successive site visits that my understanding of scale changed. It allowed me to see that it was possible to squeeze more into the park without overwhelming the sensory experience of a visitor. Urban spaces tend to be more compact than their rural counterparts. While I understand that city dwellers find exposed spaces necessary, I think that overexposed spaces tend to be underutilized. Local precedents of other parks in Cambridge confirmed as much. Therefore, I still think that a concentration of program in an appropriately scaled area would not "overwhelm the senses."

Still, if I were required to remove three quarters of the design, I would choose to save the central core of the park and leave the periphery to be removed. I would rather have a strong personal experience in one small part of the park than to dilute the entire design. This would leave a portion of the playscape and below ground alcove, the community center and cafe. I think those elements would be the minimum required for a "catch and release" for visitors.