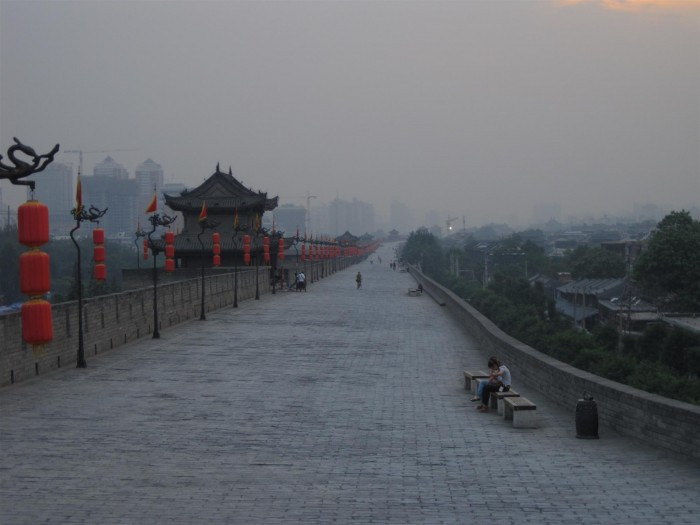 In early June I had the distinct opportunity and pleasure to visit one of the oldest and most historic cities in China: Xi'an. During the Tang Dynasty this city, once known as Chang'an, was host to the largest city in the world (81 square kilometers) housing 1 million people. While being such an extraordinary city subject to historically massive feats of engineering, it has in more recent years made attempts to attract a more modern audience to its layers of history, namely in this case, in the form of the Xi'an Horticultural Expo 2011.

I had heard about this Expo locally some months ago and I was rather mystified at the general lack of marketing on part of the organizers to get the word out. Thankfully, I was with some fellow landscape architecture friends from Beijing and we set out on our day long adventure.

The masterplan of the Xi'an Expo was awarded to Plasma Studio and Groundlab, both of which are, curiously, architects and not landscape architects (disclosure: they specifically use the term "landscape urbanism" but I think that is an oxymoron as landscape architecture inherits ALL landscapes whether they are in a city or the countryside). I make a point of this because while the masterplan may look edgy and provocative, it was a bit of a nightmare to get around initially. 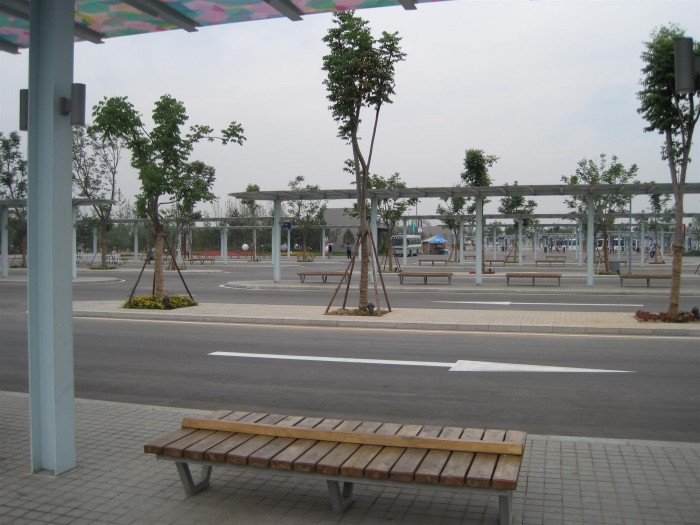 The bus unceremoniously dropped us off at this location. There wasn't any signage as to where to go from here.

The only way to get the Expo Site was to take a specialized bus from the Xi'an Railway & Bus Terminal on the northeast side of the center of old Xi'an. That 20-30 minute trip took us to the Expo bus terminal which awkwardly dropped us off the farthest place away and practically on the edge of the property. We followed the small crowd of people heading somewhere and went through security. 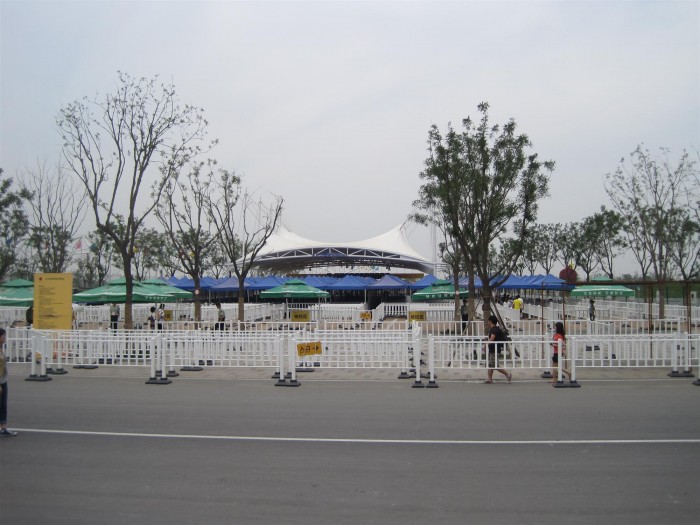 I feel that these security thresholds are great opportunities for design but, well, I guess someday someone will take up the torch. Then we picked up our maps. I got the English map, which amusingly consisted of brief English annotations marked over the Chinese map. There weren't any annotations for the Master Gardens which was the best and only good thing for the Xi'an Expo, but that will be dedicated to the next post. 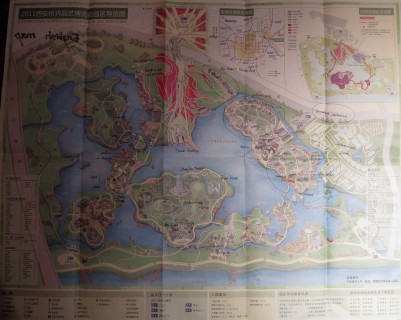 The iconic design is purely for the main entrance; the rest of the Expo site is typically bland Chinese park design. The circle on the farthest right is the only place worth going to because that's where the Master Gardens are

Now this main entrance as I was saying may have looked good on paper but we were glad we weren't visiting on a day with full sun because there were no trees! I mean, isn't this the Horticultural Expo??? 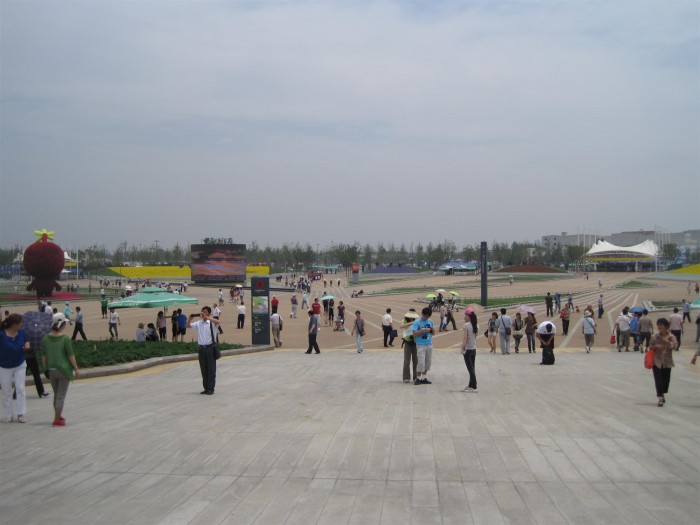 Were they expecting track and field competitions to be going on?? Millions of people running through? It's so desolate 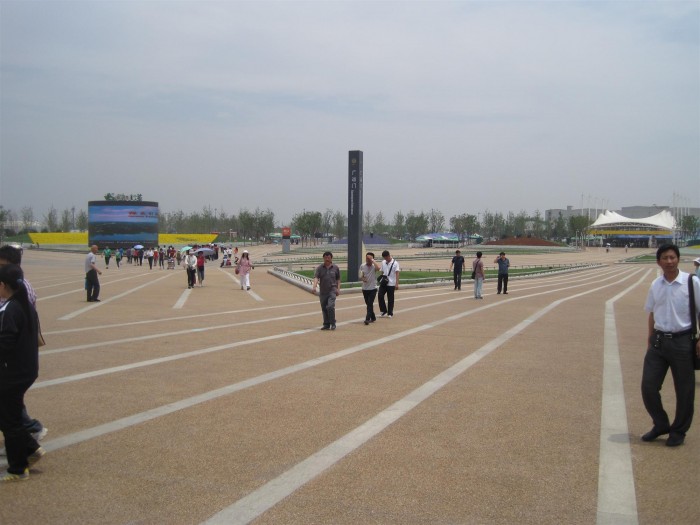 Now this bridge that spans over a highway below was supposed to be green with climbers but... I guess they ran into delays? Perhaps this was something that will take several years to actually accomplish? Oops? 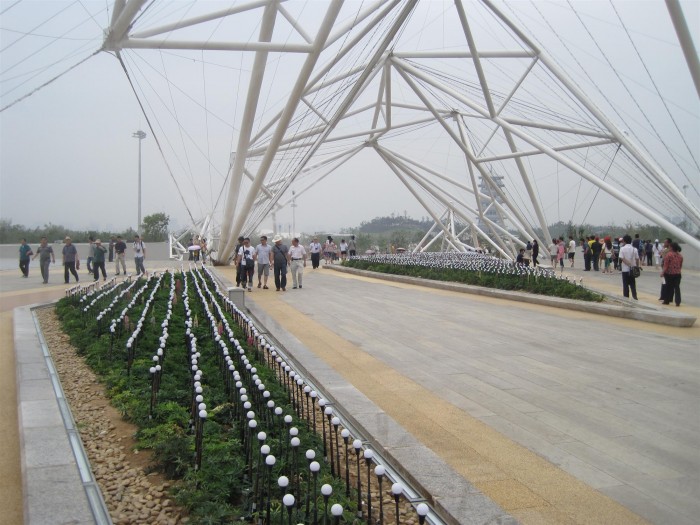 A Bridge Lacking Its Climbers. The white lamps lit at dusk

After crossing the bridge we were met with the following vista. We decided to take a closer look at the flower beds on the right.

View of Expo Axis from Bridge. The array of shade structures and fences would later inhibit our pathfinding to the east (left)

If you've been long enough in China, you are bound to see a certain fascination, even paranoia, about lush monochromatic flower beds. For the Chinese, I suppose, this may have been heavenly except that a) security guards patrolled with megaphones shouting at anyone who dared walk into them and b) it's flat. There's little in the way of using the flower beds as the ever so popular photo backdrop... 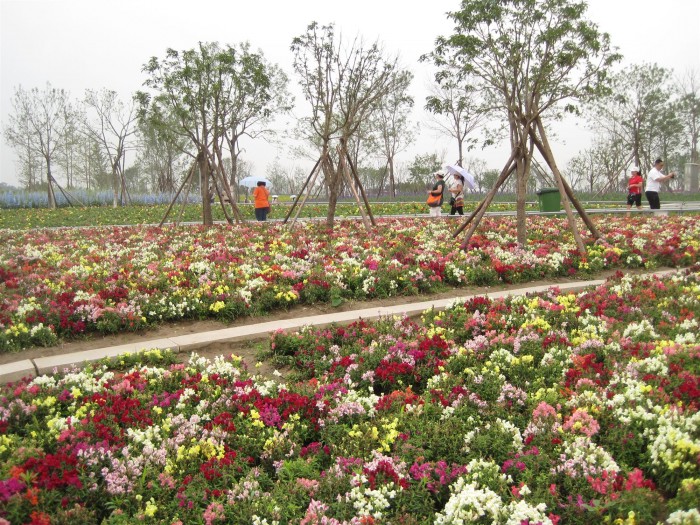 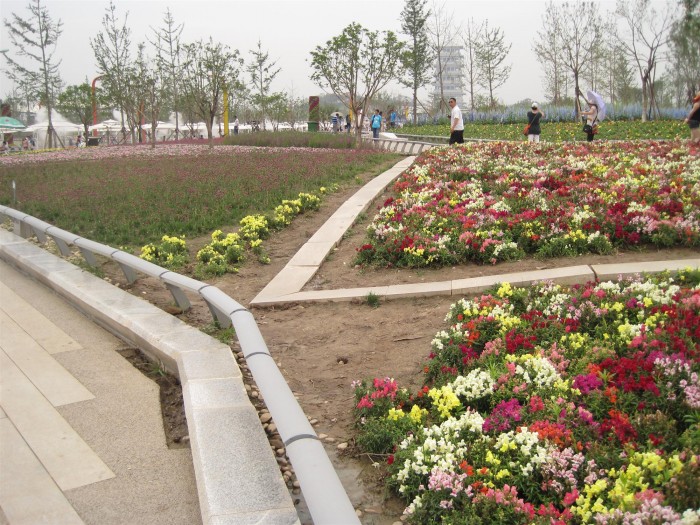 The stone bed divider was not supposed to be a path, but people tried walking on them anyway because the masterplan had an irritatingly lack of cross-paths. I mean, they're flower beds, we get it! ...It gets pretty boring pretty quickly.

It wasn't hard to notice that this site was quickly executed. There were many instances of shoddy workmanship, missed opportunities and... various oddities. 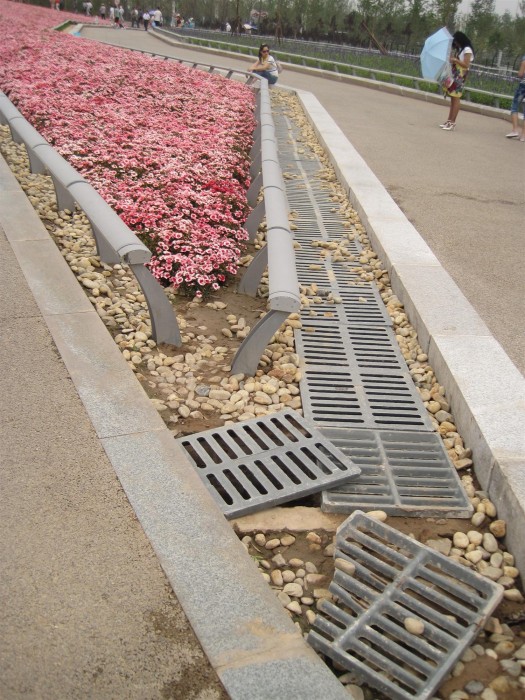 Oh, my! Did a scary creature take a chomp out of that plastic grate? Kudos to using plastic grates though, since as long as they are settled in place, they do not look out of place while being cost-effective. 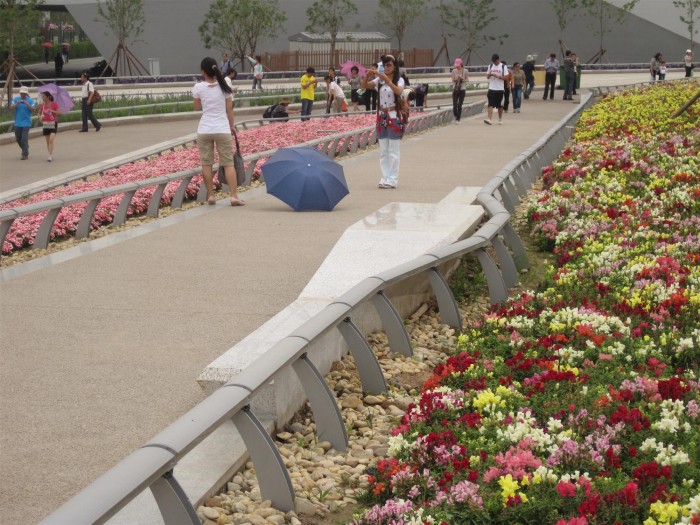 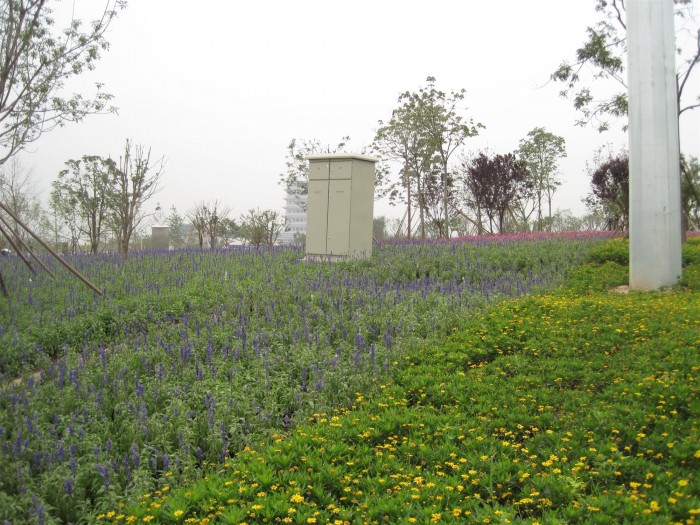 I could see a playful interaction with utility structures here... 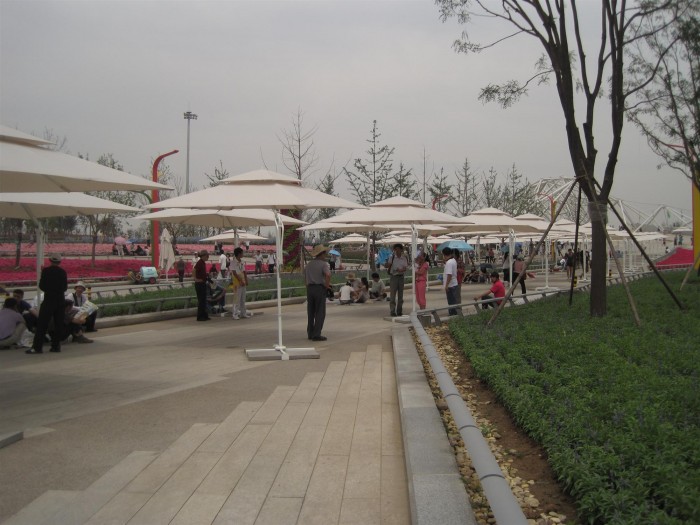 Why not design an integrated rain/shade structure? Also, lack of seating here means a lack of design foresight! 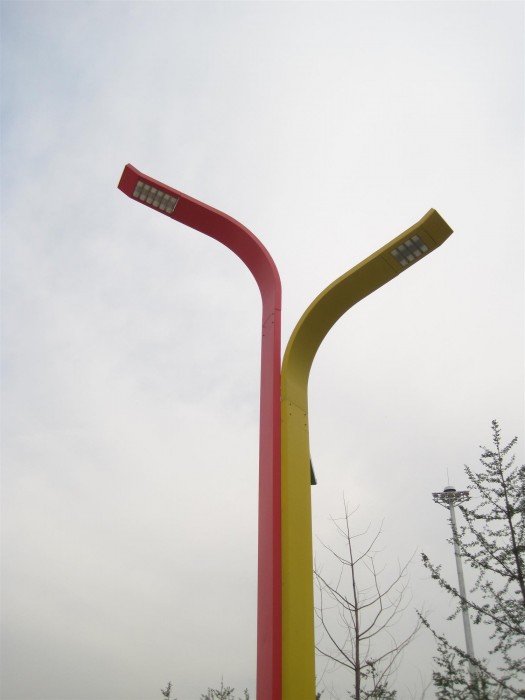 At least the lamps were designed with intent. Did not see these at night so I cannot say how effective they are

After having to jump over and run through the annoying barriers of this central axis, we had our way southeast following a route that took us around in a circle. We walked for the first bit, but had the idea to rent bikes after we had lunch at a Taiwanese fast food restaurant. 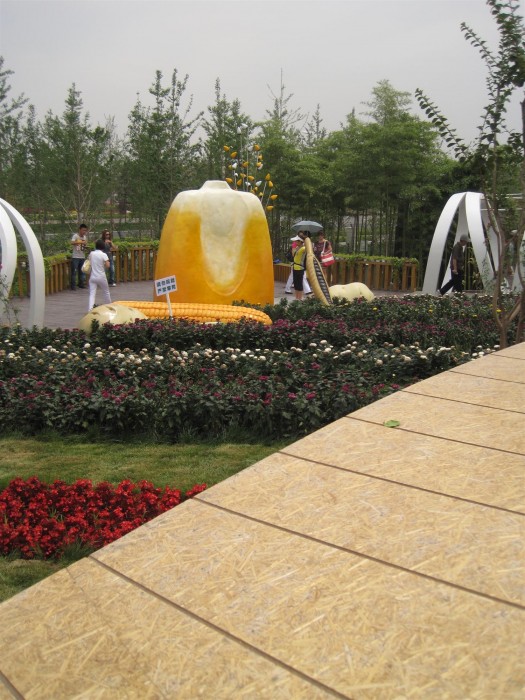 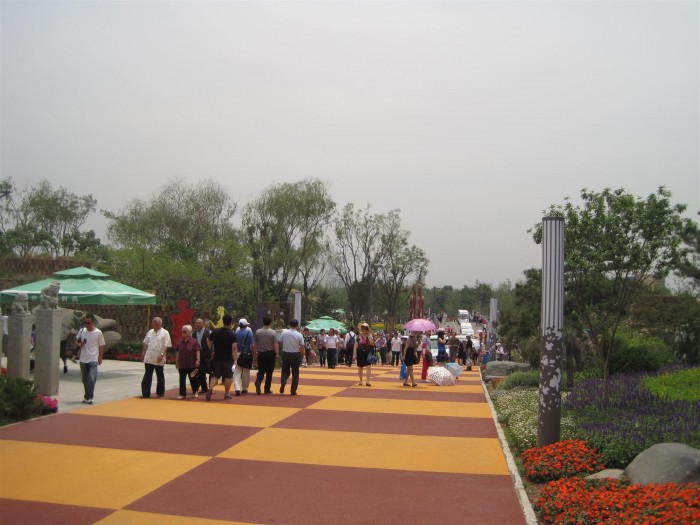 What?! Is this supposed to be the Yellow Brick Road!? 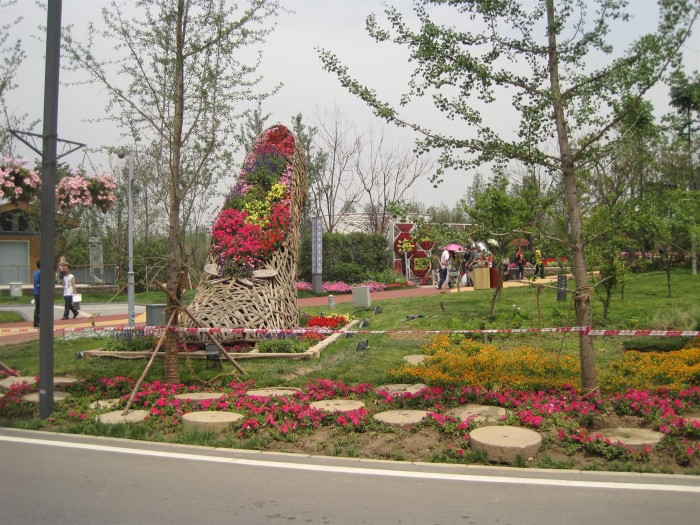 This is the Shanghai garden. I suppose that's all we're good for... high-heeled shoes and shopping 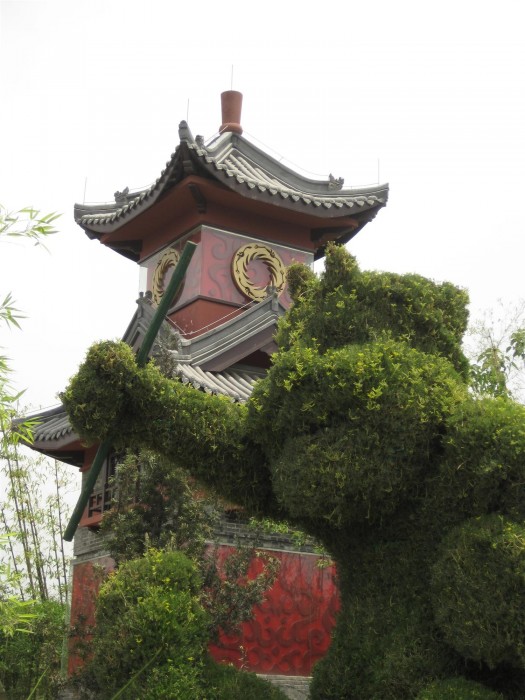 I do believe that is a chopstick wielding green mountain warrior. Looks remotely hippo-like. 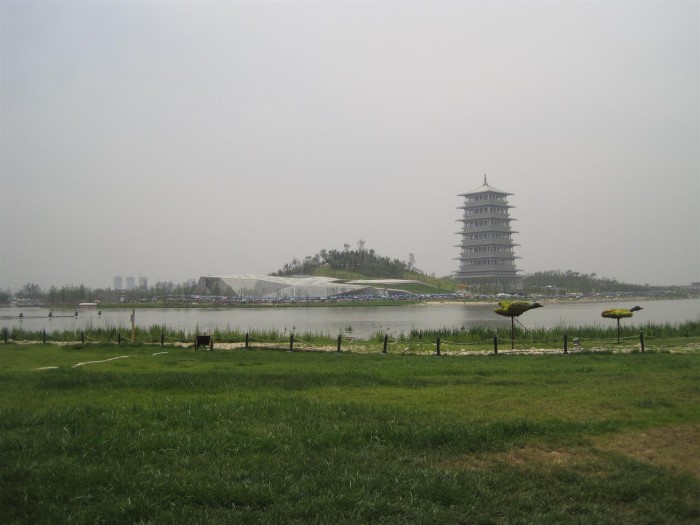 Not sure what they were trying to accomplish with that empty lawn and stationary flying birds seen on far right. In the distance you can see the 99m high Chang'an Tower on the Island

From here we went off to the Master Gardens which were quite a treat and saved the entire trip from being one great disappointment. There was, however, a nice break from monotony with a rather impressive sand castle display south of the Island. 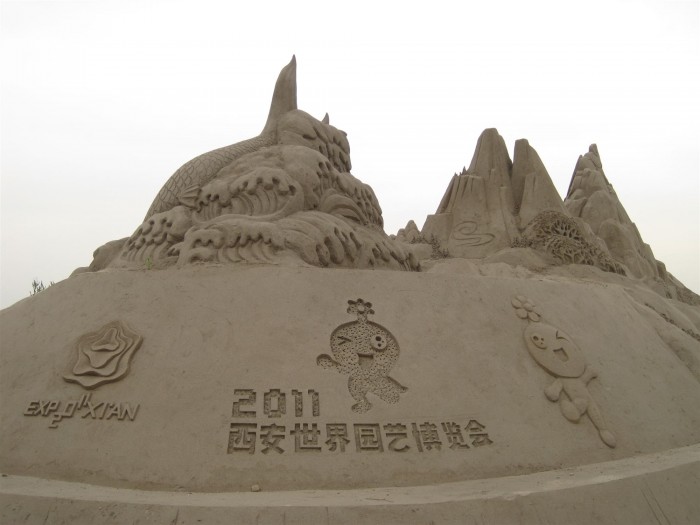 Some of the exhibits had their own captions. The one below is called "White Deer Plain", based on a novel: 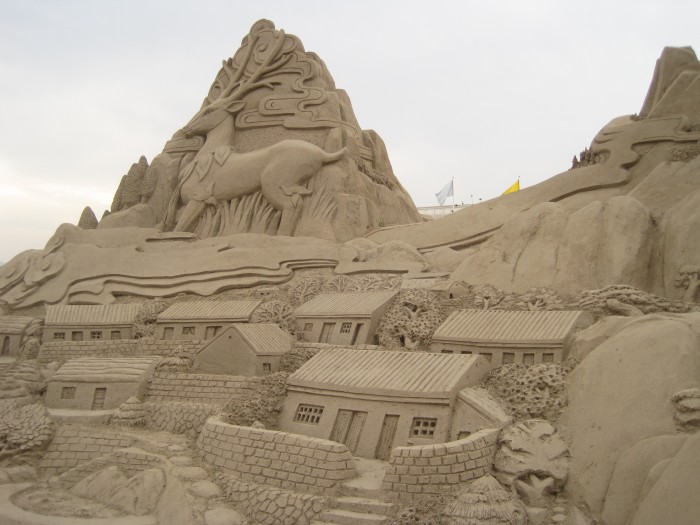 The White Deer Plain is 10 kilometers away from the southeast of the  Xi'an City. Because of the same novel written by Chen Zhongshi, its fame is widely spread. It is said the emperor Zhou Ping wanted to choose a place to found capital. They found some white deer appeared when they come to the plain, so they named this place as the white deer plain. The deer walking ditch, white deer town, lost deer village, road of deer, the white deer temple and the white deer pavilion is scattered on the both sides of the whale ditch, impressed people by the bright expectation and moving stories. 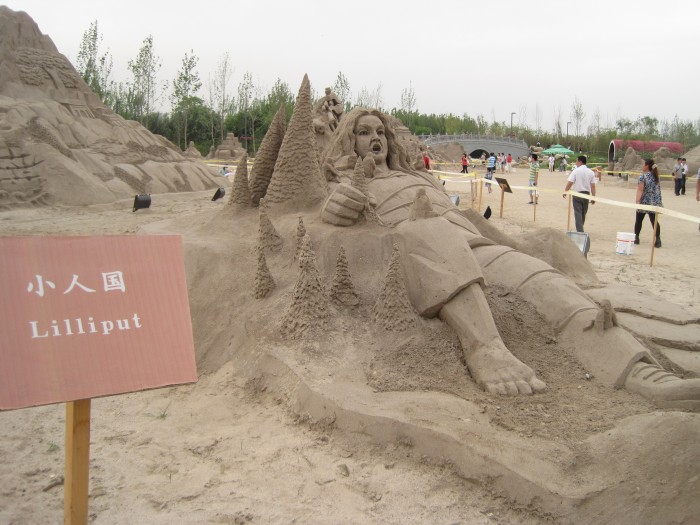 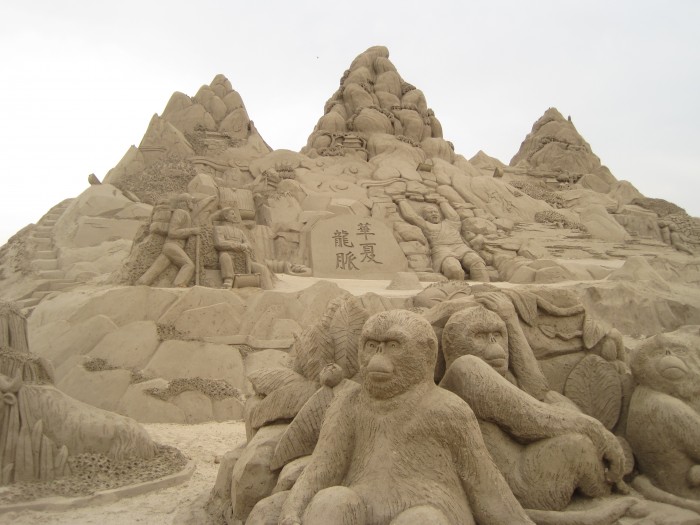 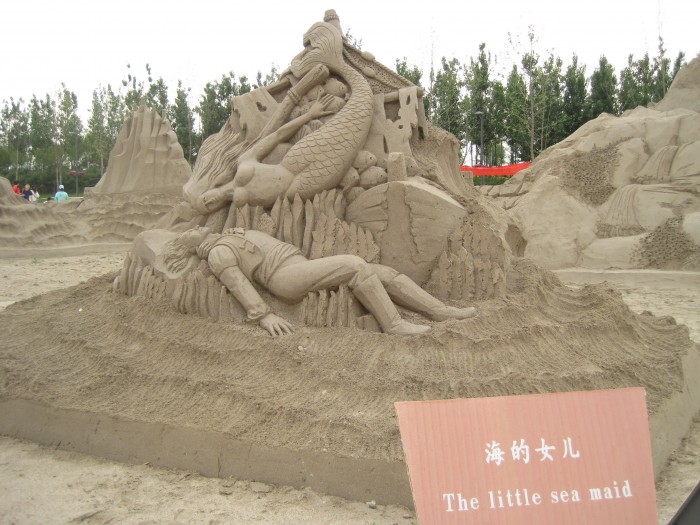 I can think they meant "The Little Mermaid"... Xi'an Expo 2011 Sand Sculpture

Somehow I have the feeling this next one will end up on a cheesy postcard one day and I'm a little mystified that it passed censorship.. maybe it's okay because it's made of sand: 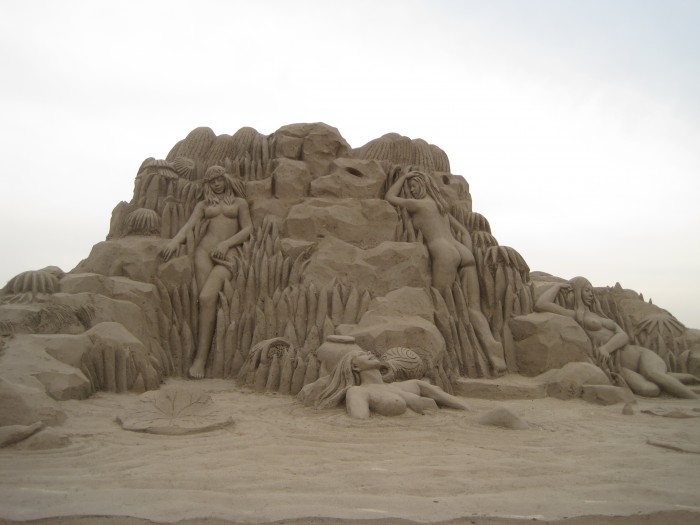 Ba River which is originated from the Qinling Mountain is in the border of Shaanxi province, China. Its original name is Ci water. During the Spring and Autumn Period, after Qin Mu Qong dominated the country, Ci water changed its name to Ba water. Ba river is one of the eight rivers which are around Xi'an.

Pretty willows, by the Ba water, wind blow to the east, purple clouds rose up in the south, intone while back home, enjoy life. The sand sculpture shows a scene of beautiful girls bathing in the Ci water. 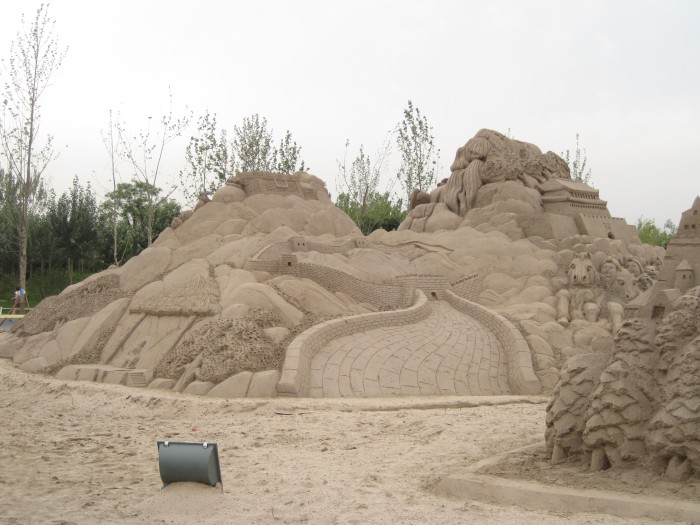 By this point we were nearing the end of our trip. Here are some other photos: 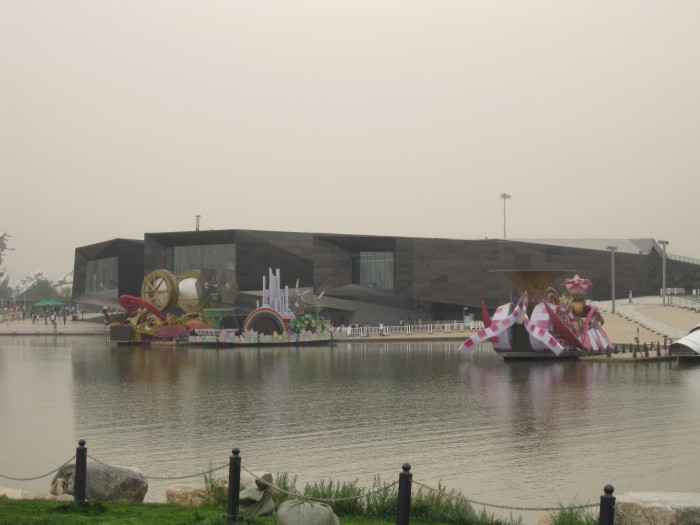 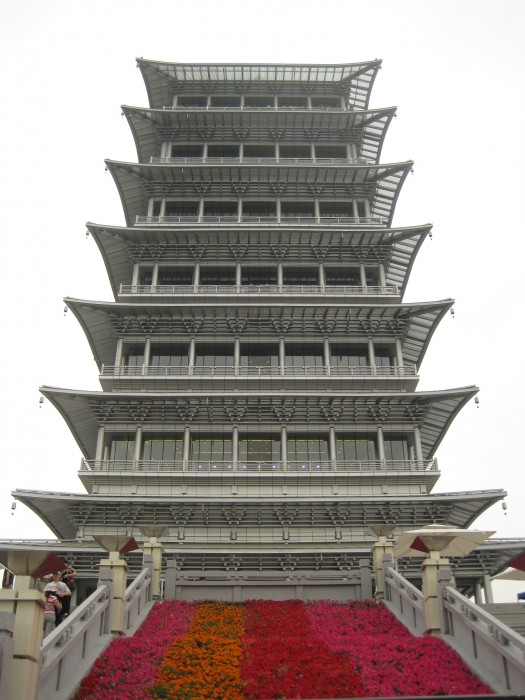 The line was too long to go into this, but the Chang'an Tower, designed by "Zhang Jinqiu, aprofessor of CAE" rises to 99m and is a modern interpretation of a Tang Dynasty tower. The steel and glass structure was designed to look lightweight and to seemingly look like a crystal. 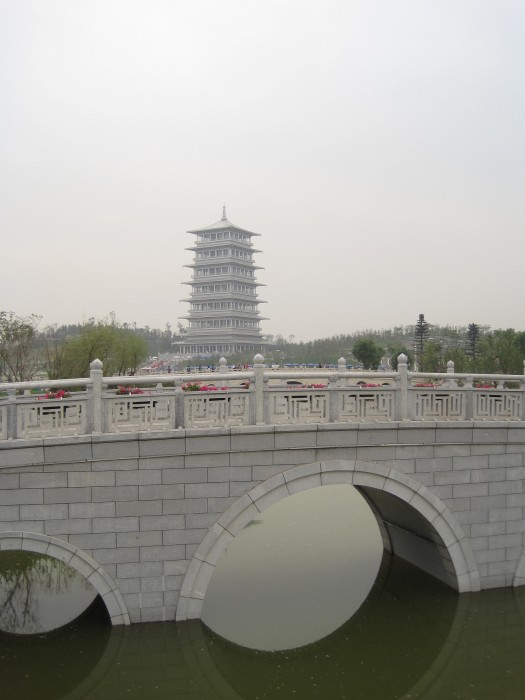 Another view of the Chang'an Tower