Unlike in China, city life in Japan often centers in and immediately around the main Japan Railway (JR) station. Very often, the JR station is a shopping mall and destination in of itself. My first experience of this was in Okayama, where my hotel faced the JR station and was conveniently located on the main street (that, by walking to the end, would lead you to the Korakuen Gardens and Okayama Castle). 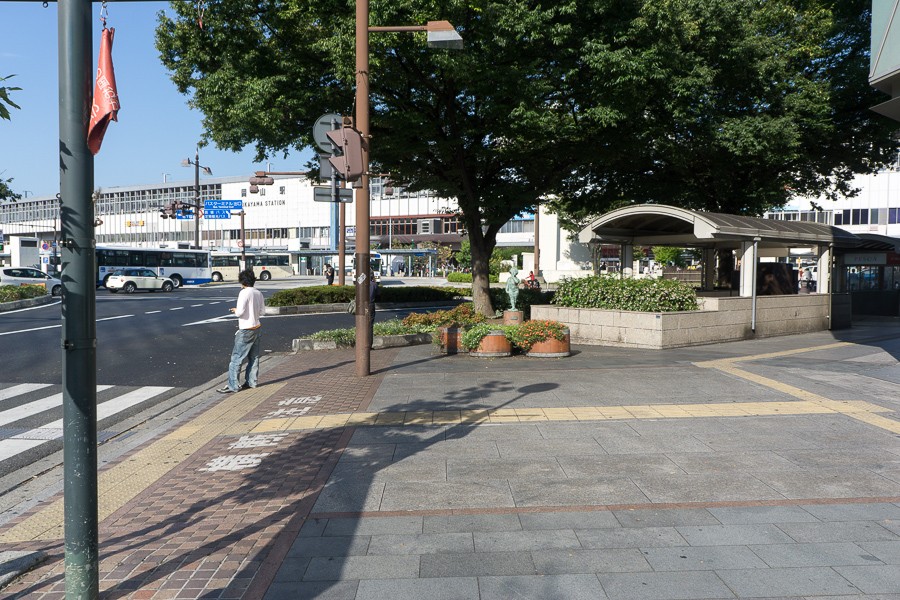 It seemed to me that either the Okayama JR station had been recently built or recently renovated as it looked quite fresh looking, and, in one area, was composed of more wood than steel and concrete. But, from an urban design perspective, the area around the station was a rather eclectic (but reasonable) mix of features. 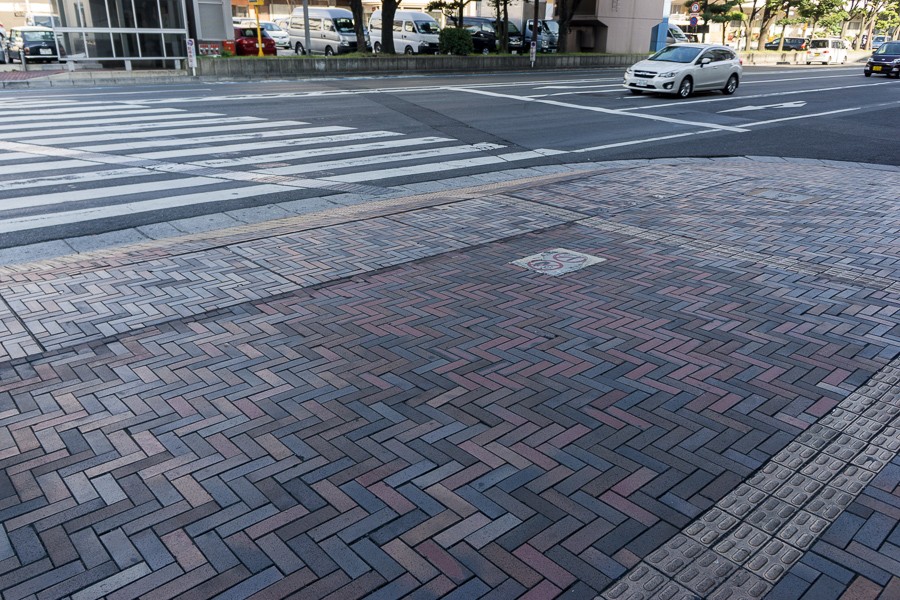 As I had noticed in Taiwan, paving materials and patterns are used rather zealously (more so, in fact) in Japan, often with dozens of conflicting colors and patterns within visible distance of each other. This is perhaps most noticeable inside JR stations and older shopping malls. 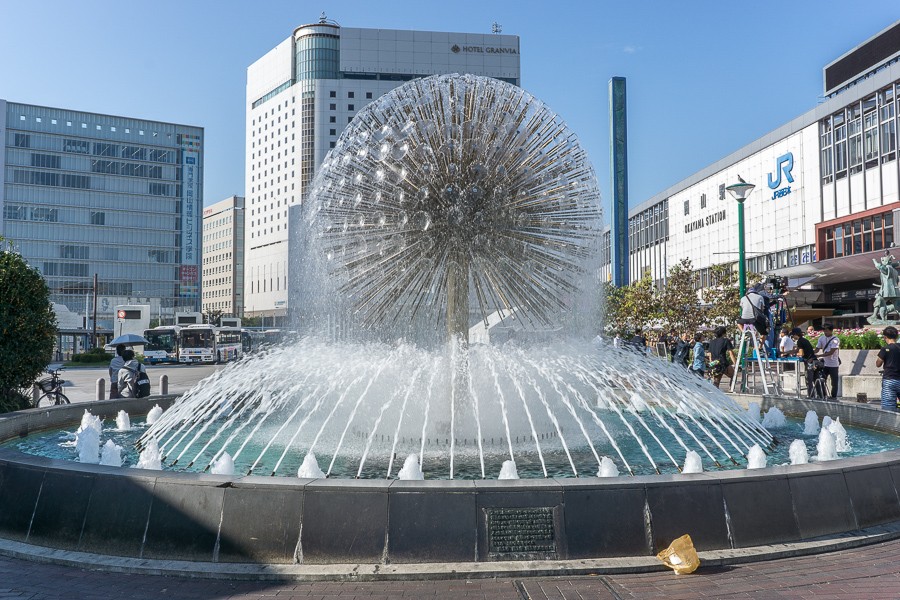 A famous water feature, although I do not know the designer

I later observed that this fountain, and its corresponding plaza of large stones, is a popular meeting point for local teenagers and young adults in the evenings. The fountain, while the details of its construction could have been improved considerably (i.e., the pool basin), is still pleasant enough to appreciate. 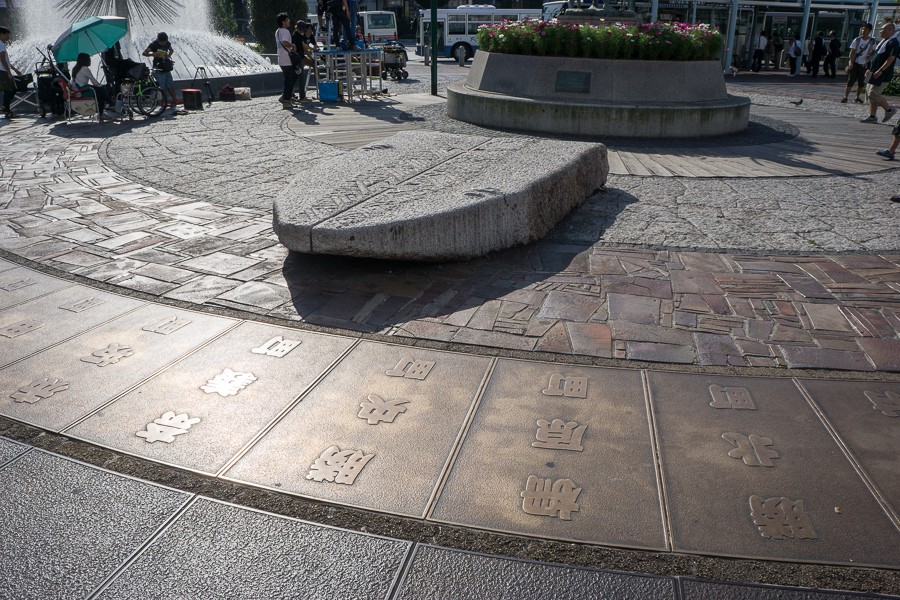 The stones and interpretive (astronomical?) plaza

Still, for a train station plaza I would have wished to see more seating. Although, as I would later see in Japan, outdoor public seating seems to be shunned and even in public city parks it is quite a challenge to find someplace to sit down (or to put down your backpack on a cleaner surface than the ground). 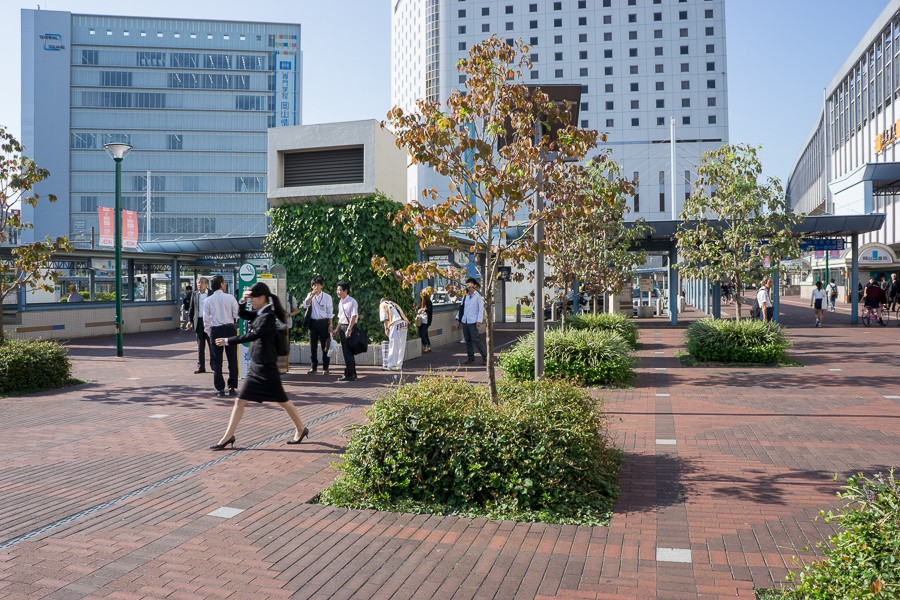 Okayama Station Plaza with young trees. It might have been a good design opportunity to use the white paving squares as lighting... and where's the benches?

Another curiosity, and, as far as I have experienced, the first time I've seen a dedicated outdoor smoking area was here at Okayama Station Plaza. I have rather mixed feelings about this as a non-smoker, I understand its implementation but I'm uncertain this a beneficial public strategy. And, I have to wonder what happens when it rains? 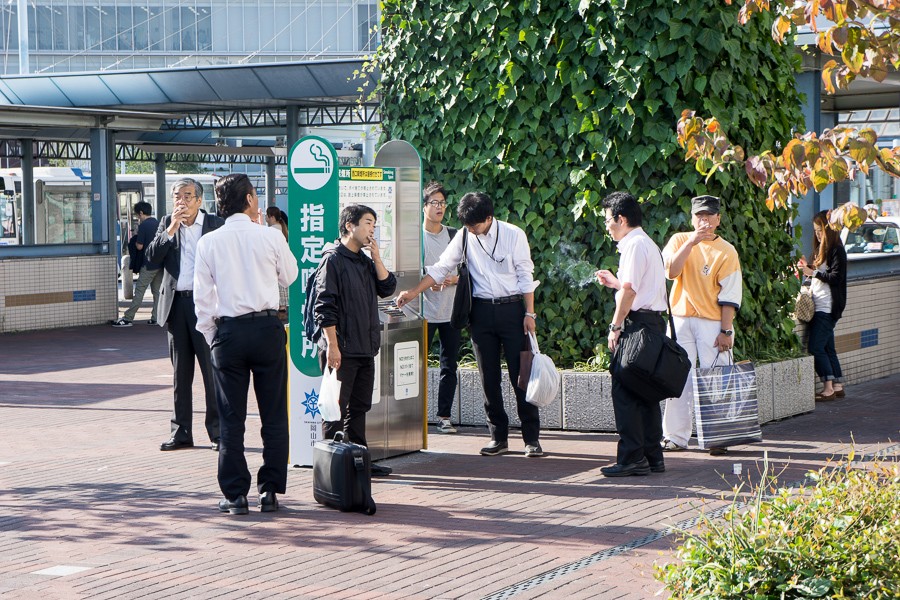 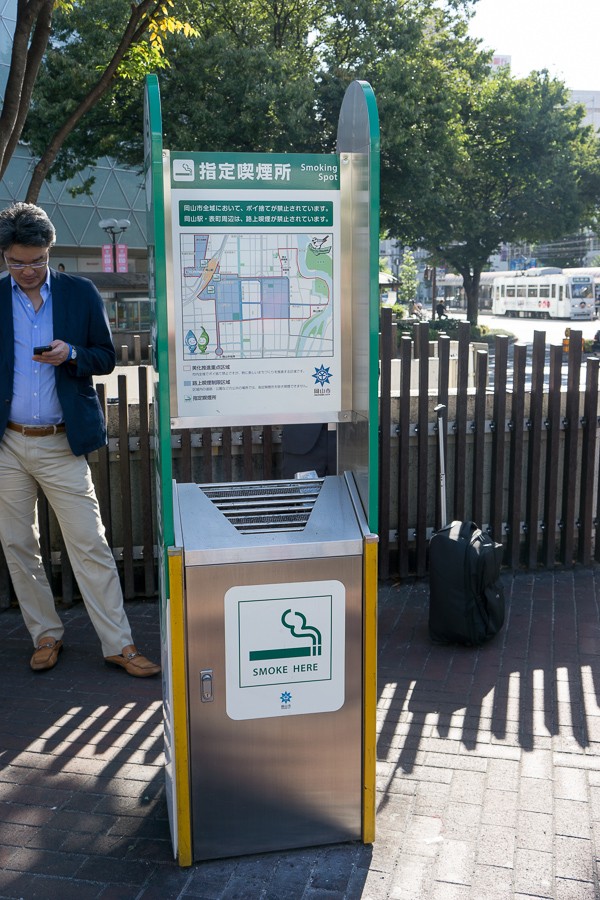 Another smoking station here with some public information

And, after you've smoked, or, if you caught your clothes on fire, it's quick walk to the Water Station! 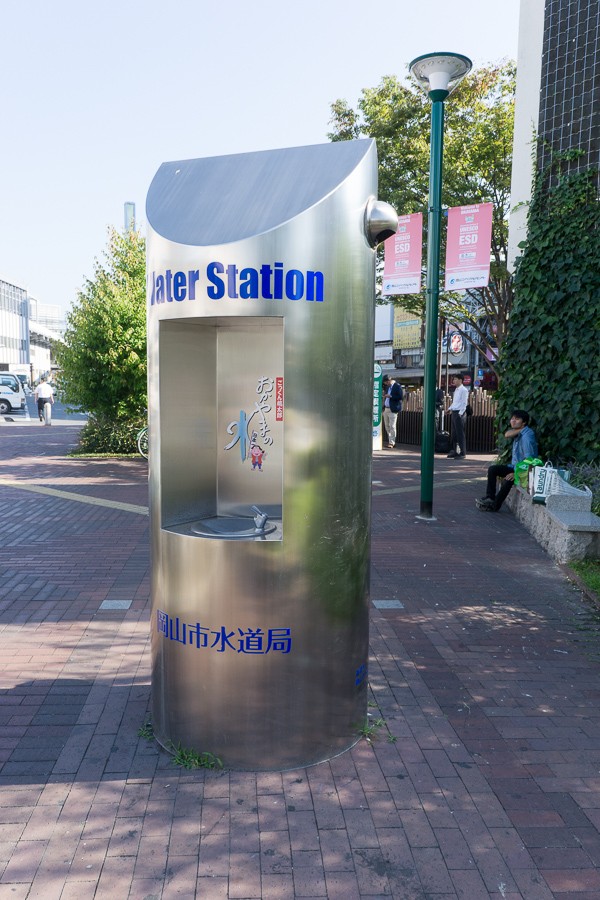 Outdoor Water Station (I don't understand the enormous size of it; it looks like it was designed in China)

Despite this quirky features, other elements on site seemed to be well implemented. 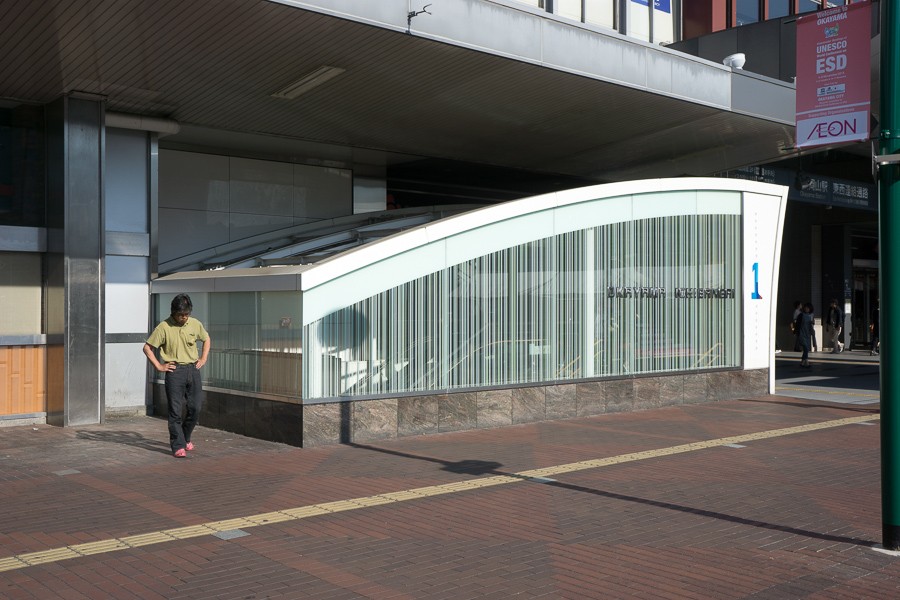 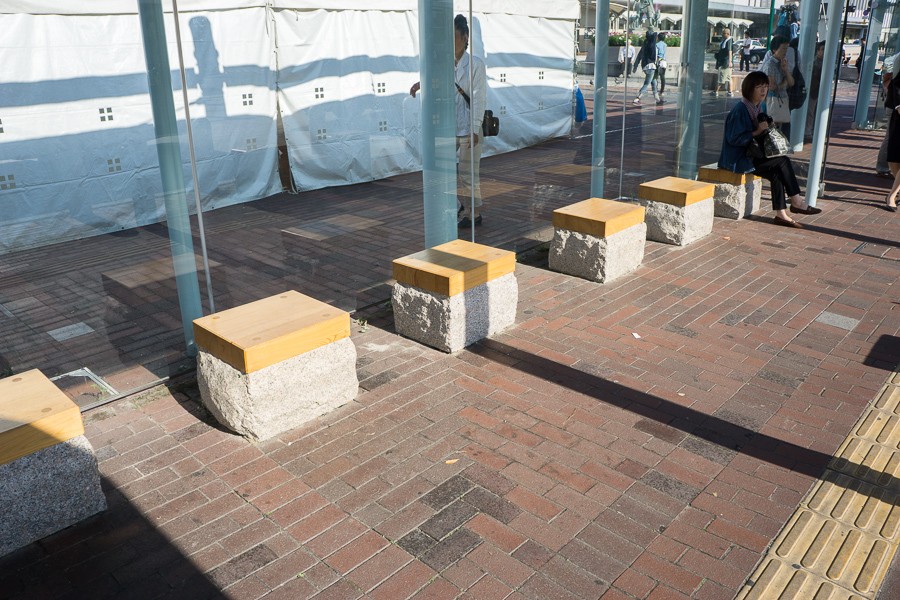 Inside the station it really felt like a shopping mall and underground food mart. Parts of it were designed well (or otherwise recently renovated). 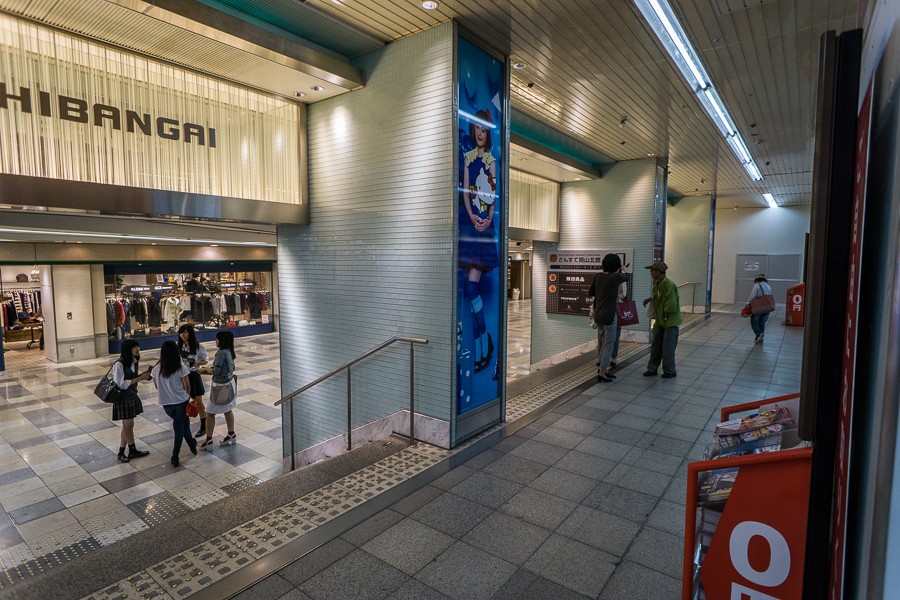 Entrance to one of the malls from the JR side (note the material contrasts!) 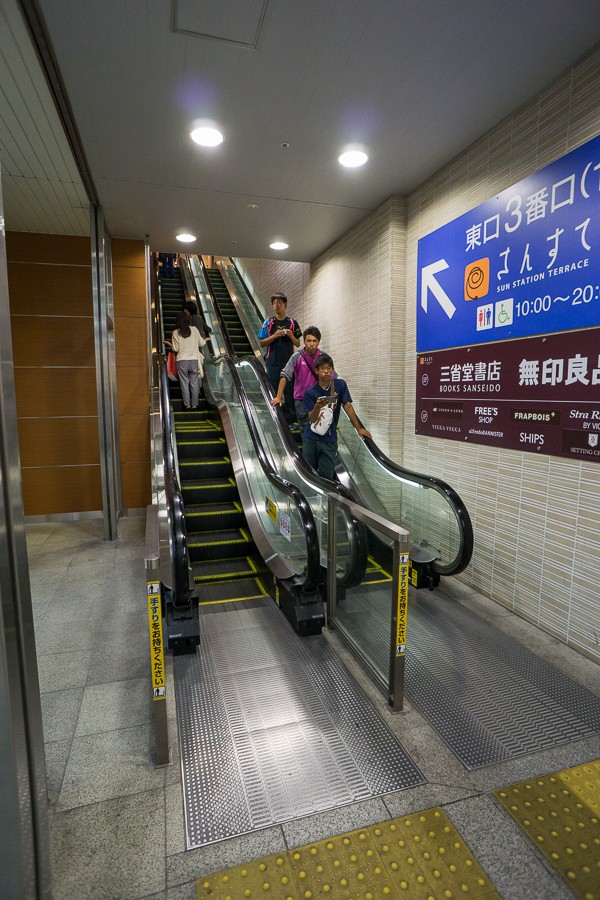 This looks like a retrofit of an existing staircase. Why else would the escalator "jog" like that?

At night, like most public areas in Japan, everything was very well lit and inviting. It's quite a contrast to American public spaces that have subdued (dark and scary) public lighting. 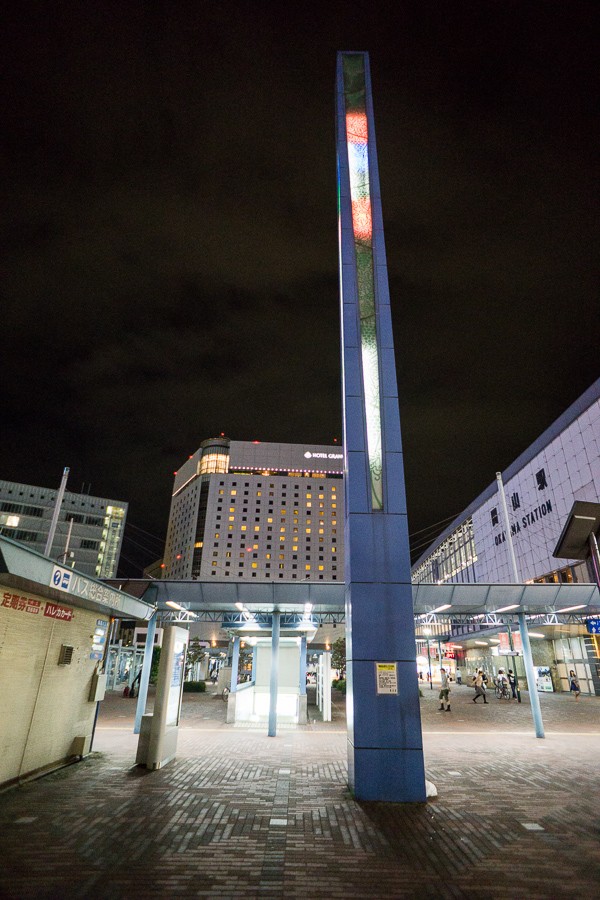 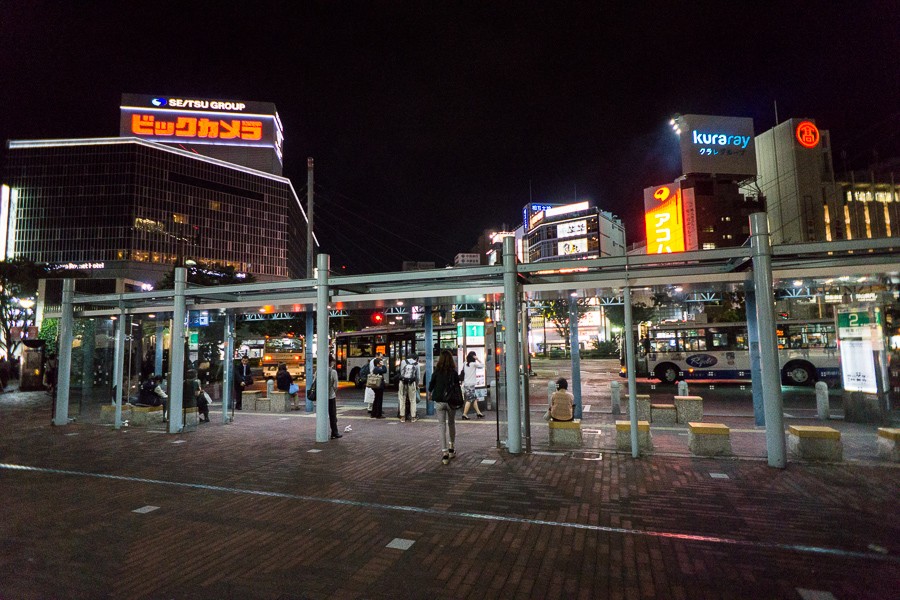 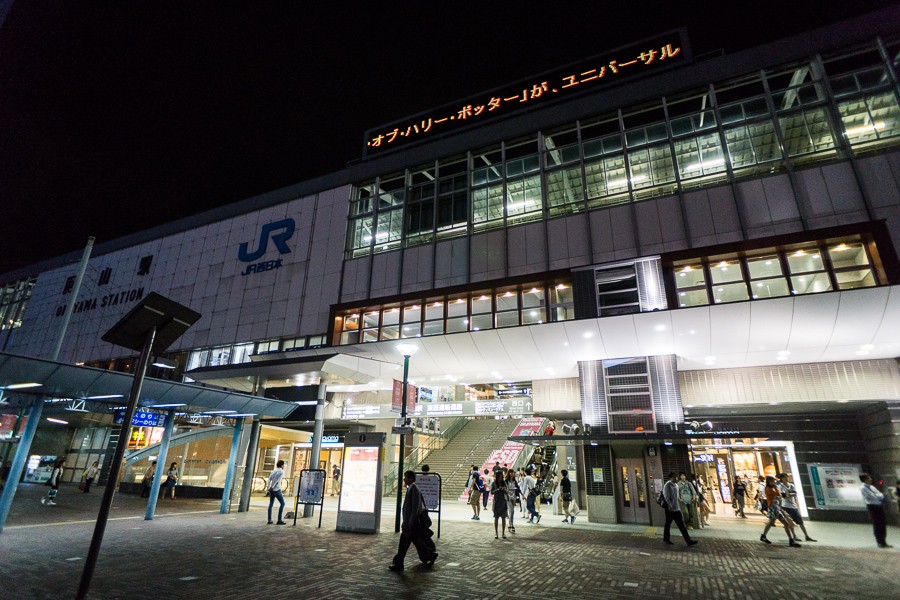