More specifically, we sought to understand how ecological processes act as a 'generative base for design as well as the ways in which program can be used to reveal fundamental structures and processes of the site.'

Studio exercises will entail an assessment of the dimensional measure, material qualities and phenomenological character of the spatial experiences of procession through and occupation of a site. We will begin with an analysis of a bio-mechanical process that we are all intimately familiar with - the experience of walking - in order to build our understanding, of the basic elements of the landscape such as a topography, exposure, view sheds, physical and visual boundaries, and thresholds.

This exercise will continue with the mapping and analysis of the ecological processes and cultural systems that have and continue to shape the site and its larger context. We will use the findings of these investigations to propose a constructed trajectory through the site that serves to shape and amplify the engagement of a visitor to specific aspects of the site's physical characteristics.

From this preliminary proposal we will proceed to develop a master plan for the site. This plan will include the introduction of a new architectural program for specific site-engaged activities, planting strategies that mediate the tension between the existing native plant communities on site, the remnant domestic plantings, and the proposed programmatic engagement with site vegetation, and finally, the creation  of a site circulation system that provides opportunities for the desired experience of the site. 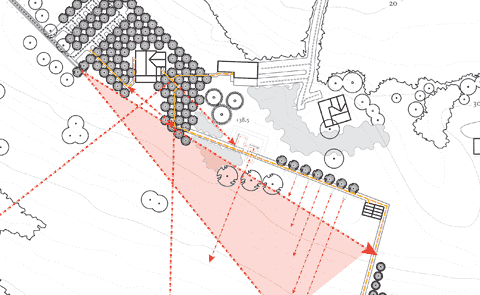 Looking back at my process, I approached the program through the use of a few bold interventions. I chose direct paths of trajectory that subtlety changed at specific view shed lookouts. I used a repetitive material palette consisting of both porous (the 98 cherry trees arranged in a grid surrounding a building above) and non-porous materials (the stone and zinc in the communal areas in center and retaining wall right bottom). However, I also used these materials for their spatial porosity. Though a cherry tree may hinder sight beyond only slightly, if that tree were multiplied, then certain viewsheds would only be visible at certain points. From one point, a visitor's viewing angle may be such that they see a dense thicket of cherry trees. And yet, a small distance further down may suddenly reveal a sweeping vista.

I had several critical concerns when I sought my design solution for these botanical illustration study areas and drawing studio. The first was to slowly build expectation of the visitor to the site through an awareness of the ridge. The second was the experience of discovery -- not immediately revealing the visual experience of the site. The final concern was for the illustrators in the study areas have an intimate experience with their subject matter. I attempted to apply three concepts to this final concern: linkage to memory, awareness of presence, and linkage to present. 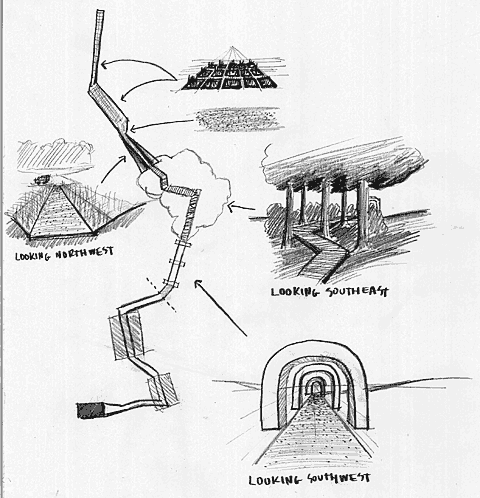 Through the use of sketching drawings on bristol paper I developed some of these solutions to these concerns. Working exclusively in plan, however, was limiting to understand spatial concerns. I began to see the benefit of models in this studio, though it was not until the later that year that I would fully embrace them. Instead, I  relied heavily on my imagination to envision these spaces. While it could be argued that I lost perspective doing this, this 'internal conversation' that I was having with myself allowed me to be self-critical. I could quickly envision solutions (mostly details --- larger elements took more thinking) and imagine myself and others in those spaces. It was significantly faster (if not as efficient) than drawing or building models for undeveloped ideas. It was only after testing this against myself would I permit putting the ideas on paper and further developing them. 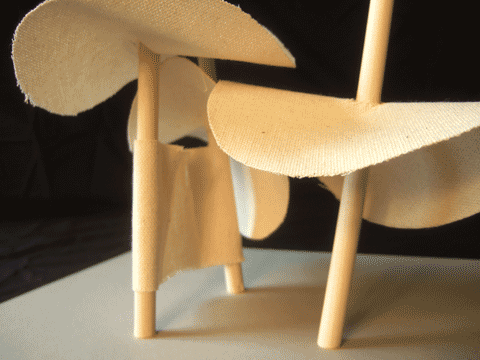 The lean back fabric study area between two trees

However, there was only one time in which I had the opportunity to test an idea realistically. One of my ideas for the study areas was to allow the students to lean against a fabric "saddle" so they could have an easier time looking up at the canopy. It was suggested to me that this would have been tiring. I decided to investigate by bringing a lawn chair to the risd farm and set it up in the middle of a grove of trees. I preceded to draw on my back while looking up. It wasn't long before the lactic acid in my arms built up beyond tolerable levels. I realized that perhaps while my idea was poetic, it was very unrealistic. 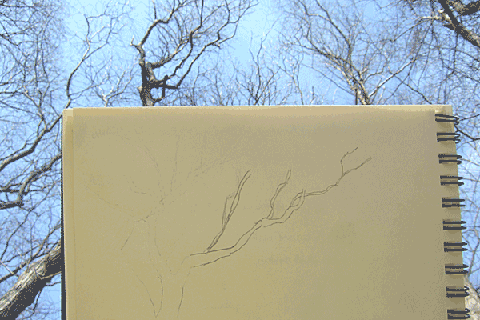 Sketching up at canopy while lying on a lawn chair

It was then that I decided to focus each study area on a specific illustration task. The first study area was redesigned for an intimate experience with the foliage of Pinus rigida. 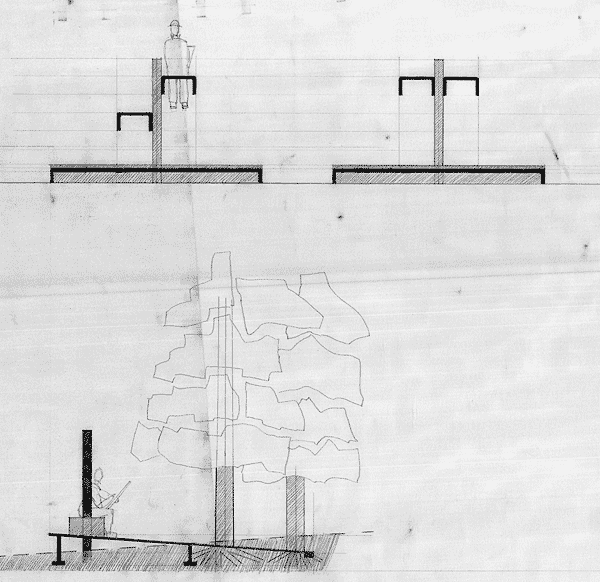 The second for study of tree roots and ground matter. 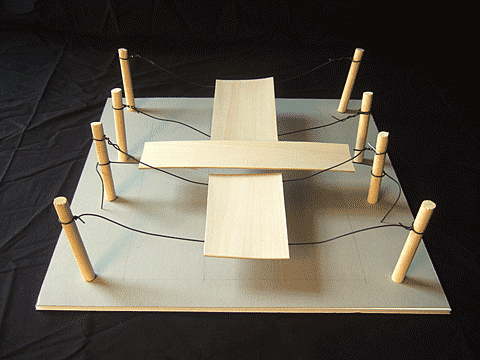 And the third for a more expansive view of forest systems, or, specifically in this case, of an estuarine marsh zone.

I think there some elements of the design that were successful, but, overall, it was a failure in meeting my design goals. A constant worry was over-exposure from wind on the site. I attempted to compensate for this while attempting to fulfill the "awareness of the ridge" concern by slicing beneath grade for a significant length of the pedestrian path. Yet, while I attempted to fulfill the "experience of discovery" I wondered if I had done enough by carving away these slots perpendicular to the grade to catch glimpses of view and light for the visitor. 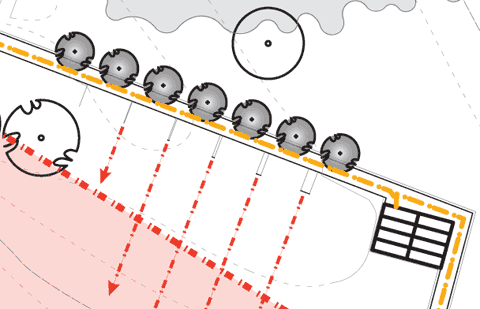 Circulation view of path and slots

One immediate thought of what I could change came to me while I was writing the example above about the lawn chair test. Instead of encouraging the illustrators to look up at the trunks while sketching, I could have had them looking down. At mirrored projections. Perhaps I could have even thought of a way to magnify the image optically for a detailed representation of the canopy.

I would have wished to have produced hybrid perspectives to demonstrate these design ideas more fully than in the few models that I built and the few plans and sections that I have. I think these would have been instrumental in conveying the atmosphere of the design.

If I were to remove 75% of what I proposed, I would have removed the strongest elements of the design -- the arrival and the parking grove. I think there is a disconnect between this part of the design and the rest of the site, which is significantly more subtle. Structurally it may not be, but visually it is more subtle. I would replace arrival with a more humble gesture, perhaps even leave most of the existing site in that area. This would be a  more passive instrument to adjust visitors' moods before entering the site. It could even be more effective if one were to look at this non-intervention from the perspective that this is an illustrative "sanctuary" with modest accommodations. I am reminded of this from years past on a visit to a monastery in New Mexico in which the entry drive was a dusty 13 miles to its gates. Spartan in complexity.