In Search for Design: Reflections on 4 1/2 Months in Shanghai 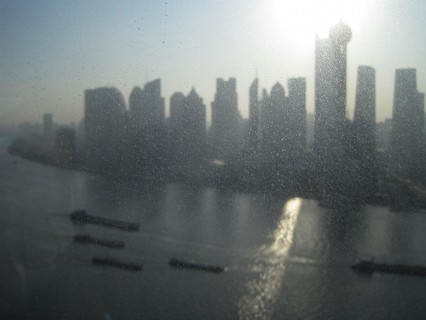 This marks my 50th post on Landline, and, as such, I find it fitting to make a critical list on what things I find unacceptable in landscape architecture practice... in China. Note that this is heavily influenced by my time at a corporate firm:

1) No context. No grounding. No place. There is no identity, just a blank slate for the designer to willy-nilly invent anything from thin-air without regard to a site's history or the narrative of a site's neighbors.

2) No placemaking. There is no such thing as a vacuum in landscape. All sites have history and the capability for the development of a different place. Yet, throwing program as if one is throwing seeds only merits awkward happenstance. Similarly, packing program until the container is about to burst will only lead to headache and program in-fighting.

3) No design for silent spaces. Space that has no program. Space that is a respite. Space that will become program in years to come.

4) No design concept. I do not mean a "means-to-an-end" -- if one were designing a river promenade, let's say. No, I mean the concept by which the design is being driven. A promenade cannot drive a design. It is the roadway for the design. The driver must be something that provides context and place; creation of new rituals; interfaces for exchange; etc.

5) No considered or deliberate way of working. Everything is rushed through the door, so the tools of the trade are CAD, SketchUp and Photoshop. Almost always in plan, occasionally in section. These are representation tools, not tools to test design ideas. Presentations are quickly and shoddily put together at the last minute with pathetic attempts at diagramming done last, not first in the design process.

6) No testing of design ideas. Physical modeling is never done because there is no time or money for it. But then, when things are built, there are many instances (in China) of awkward moments, things not understood, things not planned because they were never tested; they were only rendered to look pretty.

7) No diagramming. There are confusing diagrams made in PPT presentations, but never are there any diagrams made for design concepts. What are you really designing for the client? What is the big idea? How is that important?

8 ) No questioning. If the Design Director has created it, you cannot question it. It is the rule of law. Even if it does not make sense to anyone other than the Design Director. You can try to change it, evolve it into a more understandable design, but, chances are pretty high that you will be wrong about it and will have to change it back to its former nebulous design.

9) No saying no. There is no such thing as "no". There is only "yes" and "yes, we can". "Yes, we can make this completely pointless design for you, Mr. Client"; "Yes, we can take on another project even though there is a team of 12 people overseeing 70 projects which is more than what most sane firms see in a few years"; "Yes, we will make this change for you Mr. Client because we have no will of our own and things we care about in design are irrelevant because of course we are not professional landscape architects committed to informing you about what works and what doesn't in design."

10) No design direction as a company. I work for a design firm that does everything from amusement parks to high density residential to commercial -- pretty standard fare right? Except that there is no one single ethos to describe the company's identity as a built work! This is not an issue for firms that design with Robert Irwin's idea of "site determined" practice, but how can a company have a clear identity when it both designs with a contemporary palette and a convoluted neo-- Italian/French/(enter your country here) --style?

11) No appreciable sense of community. Oh.. there's the badminton practice, the 'free' food/gift on occasional Fridays... they do try, sort of, but it seems like just a giant cop-out. No team building, well, there is some of that during overtime (in a way), but the problem is that it is always work, work, work. I know that I work among 180+ people, but I don't feel that I work with them. It's like a design bubble. Nobody knows what the other teams are working on; and frankly, nobody cares. There never seems to be an occasion to talk about design -- no, really, to /really/ talk about design. What is working, what isn't. Finding the time to look at a book and share it.

13) No innovation. This is perhaps a no-brainer for corporate firms, but, is especially true for China. It's all about copying and not innovating. And doing it quickly. Afterall, China wants to build 400 cities by 2020... the clock's ticking landscapers...

14) No sense of ownership. You can design something, but, chances are that it will never see the light of day because through the machine mill of CAD monkeys things get misunderstood, changed, and completely redesigned. And, as in a corporate firm, you are just a cog in a great big machine churning and huffing. Furthermore, the copy-cat nature of China means that even if your original idea makes it through, it is likely to be copied within the firm by other "designers". As was the case with the German train engine maker, you introduce your ideas to China only to be literally copied by local companies that end up out competing you because, well, we have the tech now and we're a lot cheaper than you are. Intellectual property... what's that?