On Ritual and Agency

I took a break from thesis for a few days, but not before reading Zen in the Art of Archery on Thursday. My musings on that short work are in my thesis journal (this blog not being a mirror of such content; merely another medium for which I can deposit my ideas). I also took out six other books from the library; I hope to finish reading them by next Sunday. I think it's time to seriously delve into Michel Conan's Ritual and Agency as I have been putting him off for far too long (seemingly thick volumes scare me):

I took a look at Conan's introduction and three chapters that he describes; of which I will write of below. There is an attempt to define what a ritual is and that brings us to rites of passage. The traditional model of this had involved three stages: the first being a 'life-world separation', and the second is to pass from one experience or status to another and the third is the 'reintegration [of] a new social identity into the life-world.' (5) A more modern approach such as that suggested by anthropologist? Catherine Bell defines rites of passage under certain categories: the rite of passage, calendrical rite, rite of exchange and communion, rite of affliction, rite of feasting and fasting, and political rite. (5)

Before reading this text, I was assuming that a rite of passage was a progression from one (social/cultural) status to another; but if I were to accept this newer thinking, only the rite of affliction has the most weight and importance for the thesis. As I have written in the past and (likely) elsewhere, the operators in the thesis site are outcasts of society, whether by their choosing or others. I do not believe that these outcasts would like to remain in their state; it is highly likely as man is a social creature that these outcasts would either want to create their own community or somehow reach an understanding that would enable them to rejoin the society from which they left.

As an aside, I just looked up Thoreau and his Walden Pond experiment because I was not certain of his view on solitude. Somehow over the years I assumed that the outcome of his experiment was that man cannot live alone. It seems I was mistaken; although rightly so man cannot live alone without hardship, Thoreau was suggesting that man needs to learn solitude to contemplate on life in order to transcend his normal existence.

In Conan's introduction, the rite of affliction is defined as being a way of restoring the self so that the affliction that prevented active participation are nullified to enable return to a 'harmonious' community.

1. 'Sacred Texts and Ritual Spaces in RamLila of Ramnagar' by Sarah Bonnemaison (173-190)


There is a Hindu epic tale known as the Ramayana in which a Ram must come to age, battling evil and finding love as he travels across India. A festival at the end of the monsoon season known as RamLila ("Ram's play") narrates this story. (173) The public performance of this in a town called Ramnagar, famous for its lavish representation of the RamLila, purposes that the participants are not only the audience, but 'find [themselves] acting in it.' This is realized as the stage of the play is not in a fixed location, rather there are over forty settings '...installed in the gardens, courtyards, temple grounds, and open fields of this small community.' In addition this, a kind of 'temporary urbanism' is constructed at these sites due to adjacent refreshment stands popping up for the audience's enjoyment. (174)

Yet it appears that as much as the RamLila is a dramatic and sacred narrative, it is also a processional pilgrimage:

'...The audience follows the actors, sometimes chanting, sometimes in silence, while at other times they simply experience the passage of time within the narrative. The journeys wend their way in the night through narrow alleys and around the natural contours of the land, taking detours and often stopping to witness small scenes enacted along the way.' (178)

Reading to the end there was nothing else of note to help my thesis, save for the Lila adapting to its players; an anthropologist documenting the Lila year after year became known as 'the anthropologist with a note book' whereas the author of the text, an architect, was asked to strengthen walls and redesign an entrance gate. (190)

2. 'Africans Discover America: The Ritualization of Gardens, Landscapes, and Seascapes by Suriname Maroons' by Richard Price (221-236)

Suriname is the smallest South American country with a population of 470,000, speaks Dutch but is not a part of the Kingdom of the Netherlands and is larger than Nicaragua, which is the largest country in Central America. (Wikipedia)

Maroons are descendants of escaped slaves and did not come from any particular African culture but did share their past with many ethnic groups sharing common principles of life from West and Central Africa. (221-222) Priests, princes, princesses, and tribal groups from those countries were transported over but not their physical counterparts of temples, courts and living quarters. Therefore, the Suriname Maroons needed to create new rituals in an unfamiliar (both geographically and bio-culturally with a forest environment) landscape. They designed these rituals, with much trial and error, after discovering, among other things, 'forest spirits' which told them how to survive in this unknown wilderness. (223)

The rest of the text is immaterial for me as it delves into specifics of the Maroon spirit-deity cult. I did like a quote in the last paragraph: 'There are no useless plants... only uninformed people', spoken by a Saramaka Maroon 'ritual specialist'. (236)

3. 'Devotional Landscape: Ecology and Orthodoxy in the Work of Marietta Pallis' by David Matless and Laura Cameron (263-294) 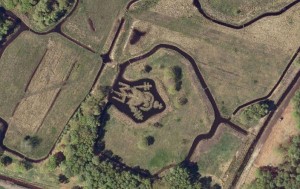 Most notable and relevant was the construction of a 'Double-Headed Eagle Pool' which involved a 'sacramental dip [in the] nude' as a Greek ritual of bathing. (276) Strangely, even though this was a personally sanctified place for bathing, in 1957 Pallis obtained permission to bury a close friend in the middle of the Double-Headed Eagle, in which this place then became ritual bathing in a space of solemnity. (279) Pallis herself was eventually buried here.