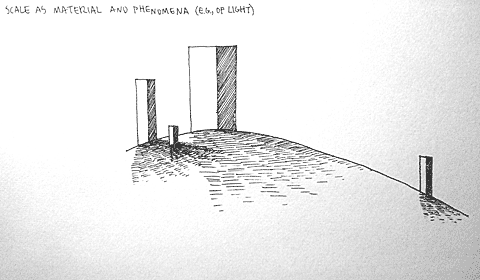 Time: Scale as material and phenomena (e.g., of light)

Peter Latz’s method to Landschaftspark Duisburg Nord had been a process driven approach. He had been reluctant to make an entire plan because it would have suggested an objectified and completed object. As Latz has said before, “the park is not a park in the common sense, not easy to survey, not clearly arranged, not recognizable as a whole.” A plan would suggest finality at a site that took more than a decade to officially complete. And yet, the park is in a constant state of evolution and “completion” as elements of the park continue to grow, be cleansed and whose industrial, man-made elements will deteriorate over time and crumble into the landscape. Peter Latz’s approach was minimal intervention in which he resisted the pastoral landscape precedent that many involved in the planning process demanded.

Landshaftspark Duisburg Nord is a landscape that takes into account the fragility of its past. The dozens of native plant species indigenous as the result of a industrial byproduct and the species endemic to a ruin for half a decade celebrates this fragility. The intent to leave the industrial shell as an artifact to decay over time, especially the site specific Piazza Metallica, demonstrates an understanding of time – that these iron plates will eventually oxidize into disintegration. Spontaneity is allowed, and perhaps, encouraged in this manner as the plants create their own minute landscapes, left free to devour this industrial shell.

Curiously, all photographic documentation I have found for Duisburg Nord would suggest that the park is open only in the summer. This is not the case, as the park is open year-round, even on major holidays. It would be intriguing to see the park in the shorter days of the years and how that changes perception, as well as to see how much snow would change this landscape of lush greenery.  The only other significant portrayal of the site in regards to cyclical time is the light installation in the evening. Bright colors are projected onto the blast furnaces and I suspect that the physical perception of space feels either more constrictive (black flattens colors/depth perception) or perhaps less overwhelming as the site may be during daylight when the sheer massiveness of the site is readily perceivable.

[note]Last week's assignment  was an attempt at action, method, material and time. It was largely written about Roger Williams Park. I do not see it fit to post. This week's assignment is Method and Time. [/note]