This last section of the booklet I have viewed with the most trepidation. Everything else was comparatively easier in this booklet and I had worried -- still worry -- that I cannot find a precedent related to these issues that I have described earlier. I think part of this concern is the question of experience and insight -- my understanding of someone else's work can be very different from their own. I may take something out of that work which I think exists, but, it in fact does not exist. However, I would be remiss to not at least make an attempt:

A designer who has been chided for his ecological monocultures -- but whose brazen attitude about them I admire. I think that the idea of a repetitive disposition is most evident in Kiley's Fountain Place (1985) and his Miller Residence (1955). His overall designs leave much to be desired, but his finite material palette works very well in the context in which his projects are sited. His work also makes ample use of groves; The National Gallery of Art has an overpowering grove of magnolia. (Kiley, 83) Its effect is similar to the one I envisioned for the cherry tree parking grove in the Ecology, Site and Design studio. 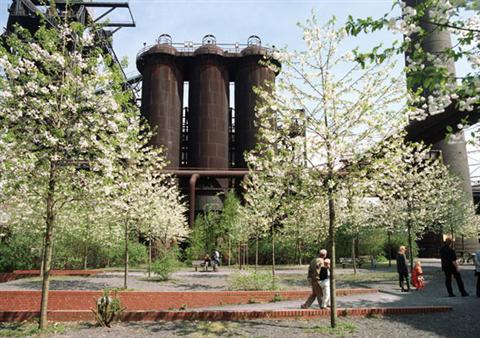 The Landscape Park Duisburg Nord is perhaps the most well-known project of Latz + Partner, having been featured in a 2005 MOMA exhibition and numerous publications. All of my terms: awareness of presence, experience of discovery, moments of pause, repetitive disposition, adventures around the corner and even, to some extent, awareness of grade, are present in this landscape park. 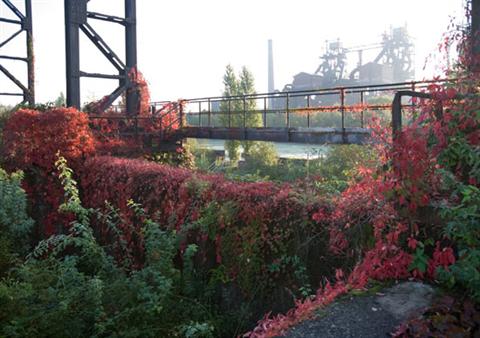 Landschaftspark Duisburg Nord, built from 1990-2002, is notable for its rehabilitation of space. While steel, fire, and workers once inhabited the steel mill, now do intentionally overgrown vegetation and civilians of all ages. As the reading, "Naturally determined urban development?" suggests to reevaluate our notion of greening decayed urban areas, the Duisburg Nord is a successful implementation of this practice of linking memory (prior, historical use) to an awareness of presence and an experience of discovery with adventures around the corner. 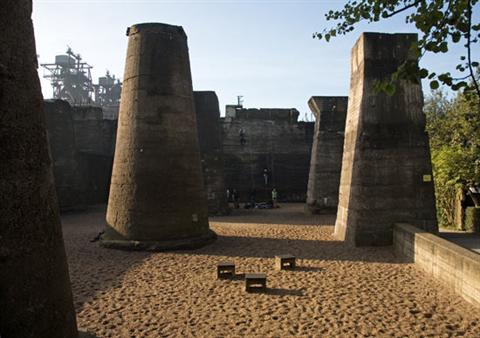 As I noted previously, there is some attempt for an awareness of grade. There is some attempt, and not a complete attempt, because the grade awareness is a constructed environment. I realize I may be contradicting myself as I write this if I am to suggest that the landscape park I designed in Cambridge -- a constructed green roof (i.e., a constructed environment) with varying grades -- is a complete attempt whereas this park is not. However, in my case the "ground" contains a gradually sloped soil structure, whereas most of the elevated "ground" in Duisburg Nord is created from the remnants of nearly vertical steel and concrete supports: walls and pillars. The elements in the park, while used for such activities as rock climbing, may suggest an awareness of grade, but that awareness is in fact being confused with something like an awareness of monumental structure (i.e., a manifestation of awareness of presence): 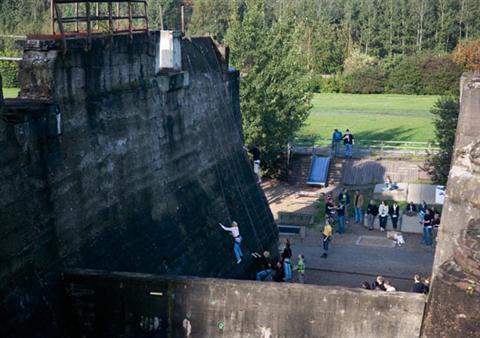 A more appropriate project demonstrating an awareness of grade is perhaps the South East Coastal Park by Foreign Office Architects. The park, whose primary program is an outdoor auditorium, is sited next to the sea. Its dramatically constructed berms are designed to simulate the sand dunes of the region, limit/expand view sheds and reduce wind/salt exposure from the sea. The material palette is simple and repeated throughout the site -- most noticeably with the crescent shaped concrete pavers, mimicking the slope of path and the slope of retaining wall. Curiously, the angled retaining wall only retains a portion of the berm, as the eye is tricked that there is more behind it because of the tall grasses planted on the berm:

I think its a rather masterful attempt of awareness of grade. The park as a whole is lacking, and I'm worried that the vegetation (mainly, trees) are a bit sparsely planted. I assume that FAO did wind studies, but if some of the berms do in fact block the cooler ocean air and if the park lacks adequate  shade coverage, I would find little reason to stay longer than necessary. Then again, the park is supposed to an outdoor theater/concert venue so if it's late at night then it might not be a problem. In any case, a fair example of awareness of grade, nothing more. 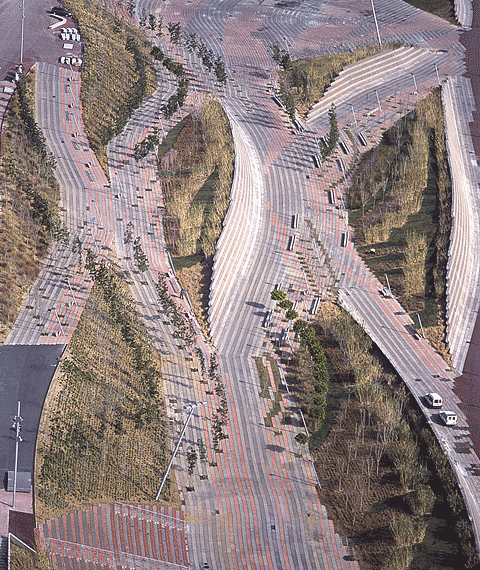 I suspect that with more circumstantial experience (researching more precedents to learn about other precedents) I can  find design work that is more attenuated to my concern and interests, and eventually, my thesis.